De Es (Dieter) Schwertberger was born in Gresten, Lower Austria in 1942. After graduating Engineering School, he studied painting with Professor Ernst Fuchs of the Vienna Academy and leading figure in the influential Vienna School of Fantastic Realism. De Es is a key figure in the Fantastic Art movement and his career as an artist is remarkable both for the quality of his works and their variety in styles and periods. Many of his works are contained in his retrospective volume, Heavy Light. De Es has worked and lived in Vienna and New York. He currently resides in Austria where he paints in his huge atelier-- a converted 19th century sewing factory.

De Es lived and painted in New York from the mid-seventies through the mid-eighties. This was the time in which most of his popular Stone Period works were done. These works ranged from drawings and lithographs to impressively large paintings on board. During this period, De Es was the key artist for the popular, mass market publication, Omni Magazine and his art graced its covers and filled its many television and theatrical advertising campaigns. Never content to remain consistent in form, this ever-changing creator has evolved through several different styles and continues his quest for personal satisfaction and fulfillment through the arts.

" I began to take myself seriously as an artist when I came under the sphere of influence of the Vienna School of Fantastic Realism. This is a group of Viennese painters who emerged after the war, with the painterly tools and methods of the Old Masters. The 'Fantastics' were intriguing--made the heart beat faster, were loaded with meaning and mystical flavors of all kinds and intensities. They displayed unbelievable fireworks of skill and wizardry. Naturally, I was pulled into this direction."

"The sense of mystery dominates the first decade of my work as an artist. The mood in a painting depends on the setting of the light."

"My first sculpture was small Stoneman. I later had the opportunity to make an installation of forty large Stonemen, or Planetarians, for the city of Bern, Switzerland. I decided to make them all look like completely different entities by painting them in a wide variety of colorful variations." De Es' painting style is now quite impressionistic, tending far more toward the abstract than ever before. His travels to India and the area of the Himalayas have contributed to his evolution in painting technique and his quest to seek the ever more fundamental nature of the human spirit and how we see the universe around us. De Es has completed a vast hundred painting assembly called the Dome of Peace, featuring many of his best works, all in huge two meter square formats. This massive installation of paintings is eventually to be exhibited in a giant circle or series of concentric circles.

"Between 1980 and 1990 I created an enormous cycle of one hundred paintings, each measuring 80" square and to be arranged in a vast circle. This 'transformation cycle' measures nearly two-hundred feet in diameter and thus marks the basic dimension of the proposed Dome of Peace building. Since 1990 I am the custodian of this exhaustive work, and currently it remains a mystery when, where, and how the Dome of Peace structure will be manifest. I think it woule be a remarkable event for the year 2000 signifying that humanity is ready for the transformation to come and the planetary age."

Many of De Es Schwertberger's  best works can be found in the Morpheus book, Heavy Light. 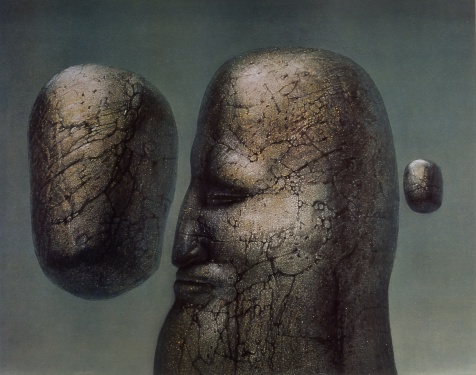 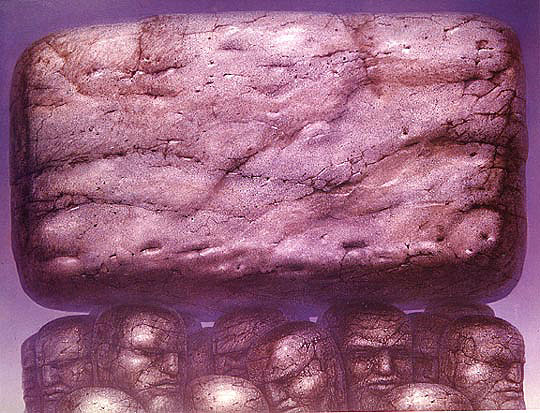