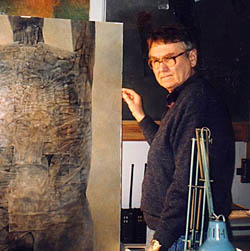 "It misses the point to ask me what scenes in my paintings 'mean'. Simply, I do not know, myself. Moreover, I am not at all interested in knowing."--Zdzislaw Beksinski

Zdzislaw Beksinski was born in Poland in the town of Sanok near the Carpathians Mountains in 1929. After a childhood was spent during the Second World War, Beksinski went on to university where he studied architecture in Cracow. Subsequent to this education he spent several years as a construction site supervisor, a job he hated, frought with pressures and countless boring details. He would soon throw himself into the arts. In 1958, Beksinski began to gain critical praise for his photography, and later went on to drawing. His highly detailed drawings are often quite large, and may remind some of the works of Ernst Fuchs in their intricate, and nearly obsessive rendering.

Beksinski eventually threw himself into painting with a passion, and worked constantly, always to the strains of classical music. He soon became the leading figure in contemporary Polish art.

Beksinski and his family moved to Warsaw in 1977. The artist had many exhibitions throughout his native Poland and Europe. He rarely attended any of them. Bekinski's art hangs in the National Museums Warsaw, Sanok, Krakow, Poznan, and the Goteborgs Art Museum in Sweden. Much of his art is displayed in the Sanok Museum of art in his native city.

"I have quite simply been trying, from the very beginning, to paint beautiful paintings."

Beksinki's remarkable drawings possess a strength in both mood and subject matter. Like his later paintings, they are intensely haunting and mysterious. The drawings, particularly, project a nightmarish quality reminiscent of the surrealist, Bohemian master, Alfred Kubin.

"I react strongly to images that have no obvious answer to their mysteries. If there is a key to their construction, they are simply illustration."

Paintings from the 1970s

Beksinski began painting in oils on masonite around the year 1970. His ability to manipulate the effects of light quickly became a hallmark of his work, and can only be compared with the renown abilities of William Turner. Beksinski's paintings aremasterfully rendered, monumental enigmans. One thing they share is an aesthetic of beauty so potent that it overpowers any desperate nature of the given subject matter, as is similarly the case with Swiss artist, H.R. Giger. The paintings as a whole are wonderfully dark, and allow the viewer to interperet them as they will, as they will certainly get no help from this particular artist. As Magritte said: "The purpose of art is mystery."

"The blend of vivid colors in relation to other more subdued colors in my paintings is like a musical theme. As in a symphony, a motif occurs, is blurred, comes back in crescendo, is finally accentuated and becomes pure and complete."

Paintings from the 1980s

"Meaning is meaningless to me. I do not care for symbolism and I paint what I paint without medatating on a story."

Paintings and Computer Graphics from the 1990s: Beksniski's paintings have grown less representational over the years and now seem almost abstract in nature. Color and texture and now the proncipal themes in themselves. Not so odd, as the artist began his career in the abstract realm. His recent computer art, however, continues the lineage of fantastic realism, and the artist never allows the technology to get in the way of that he is attempting to convey creatively.

Beksinski was murdered in February of 2005, during a robbery attempt at his flat in Warsaw. He will be remembered as a brilliant artist, and by those who knew him, as a docile man with a profound wit and keen sense of the human condition. I cherish the time we spent corresponding as friends, self-aware neurotics who could not wait to try and top the other. What a remarkeble piece of work he was. A bit of Woody Allen, a dash of Oscar Wilde for spice, and brushes of Francisco Goya and William Turner. – James Cowan 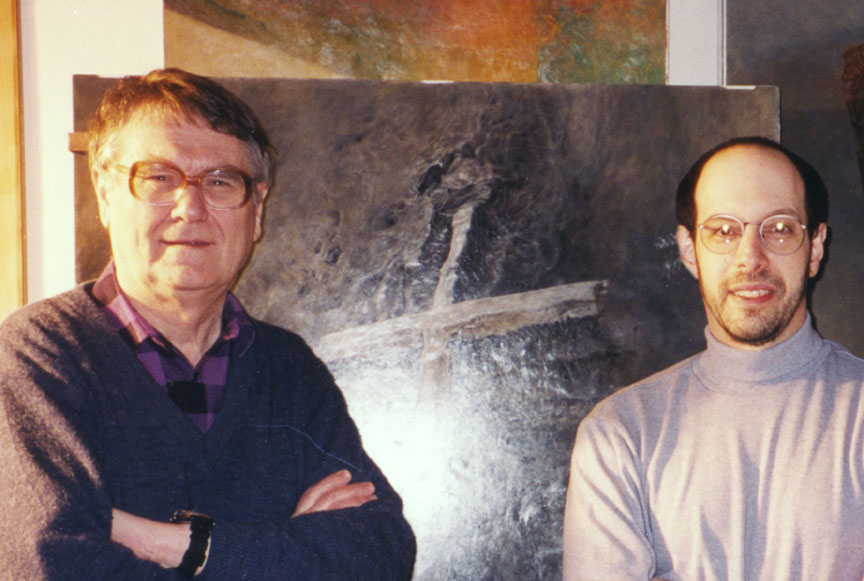 Beksinski and James Cowan in Warsaw.

Morpheus published The Fantastic Art of Beksinski  art book with an introduction by James Cowan.

Work by Zawadzki may also be of interest.

All works are untitled by the artist. 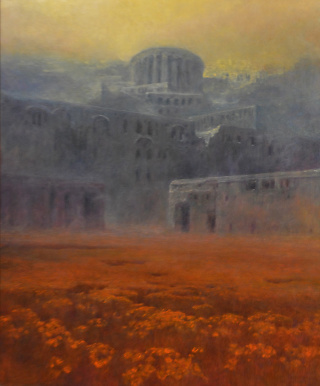 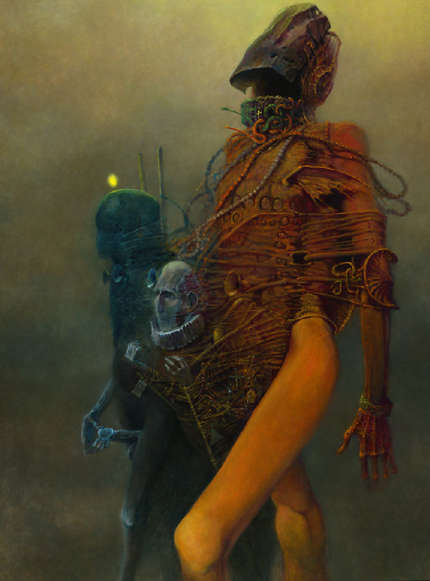 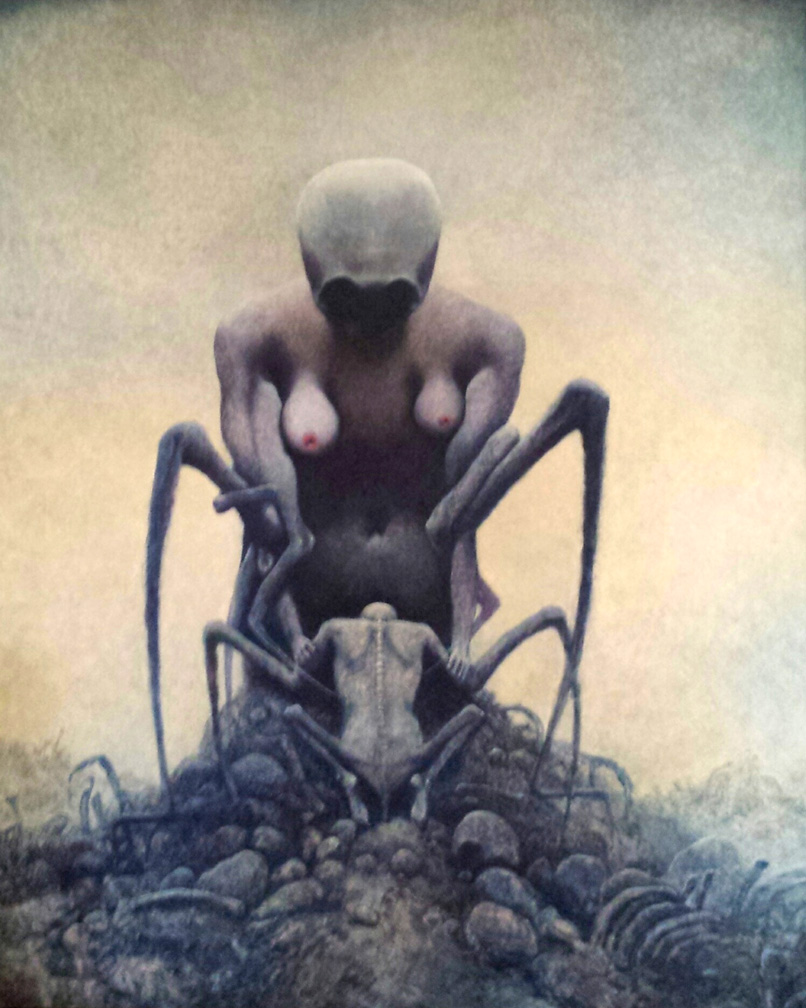 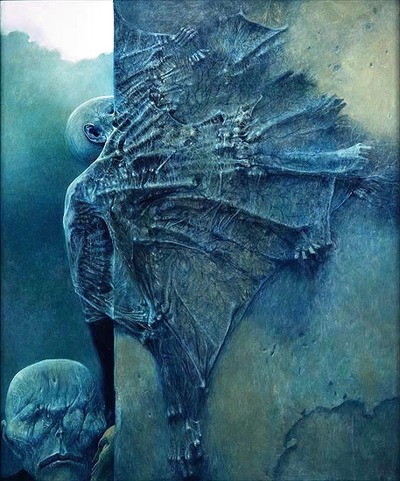 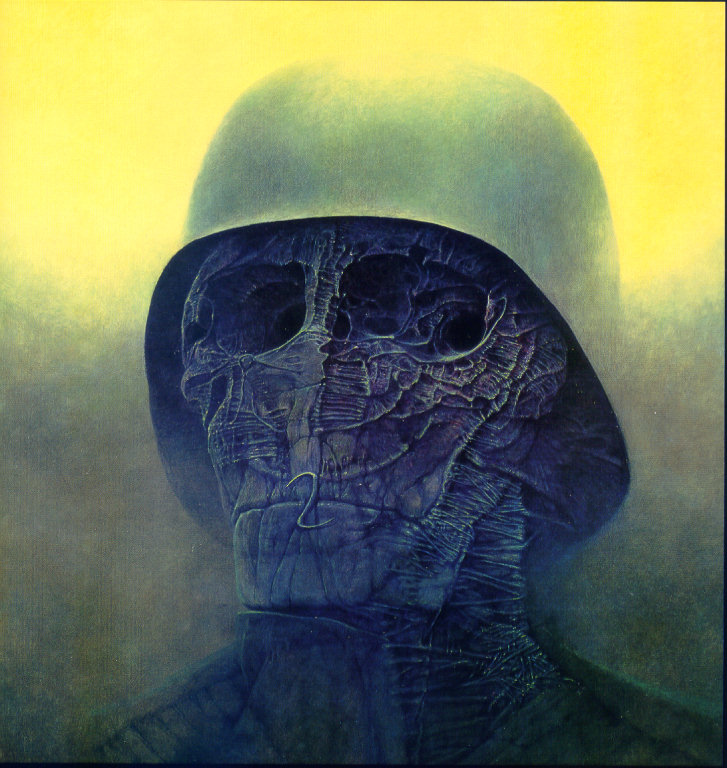 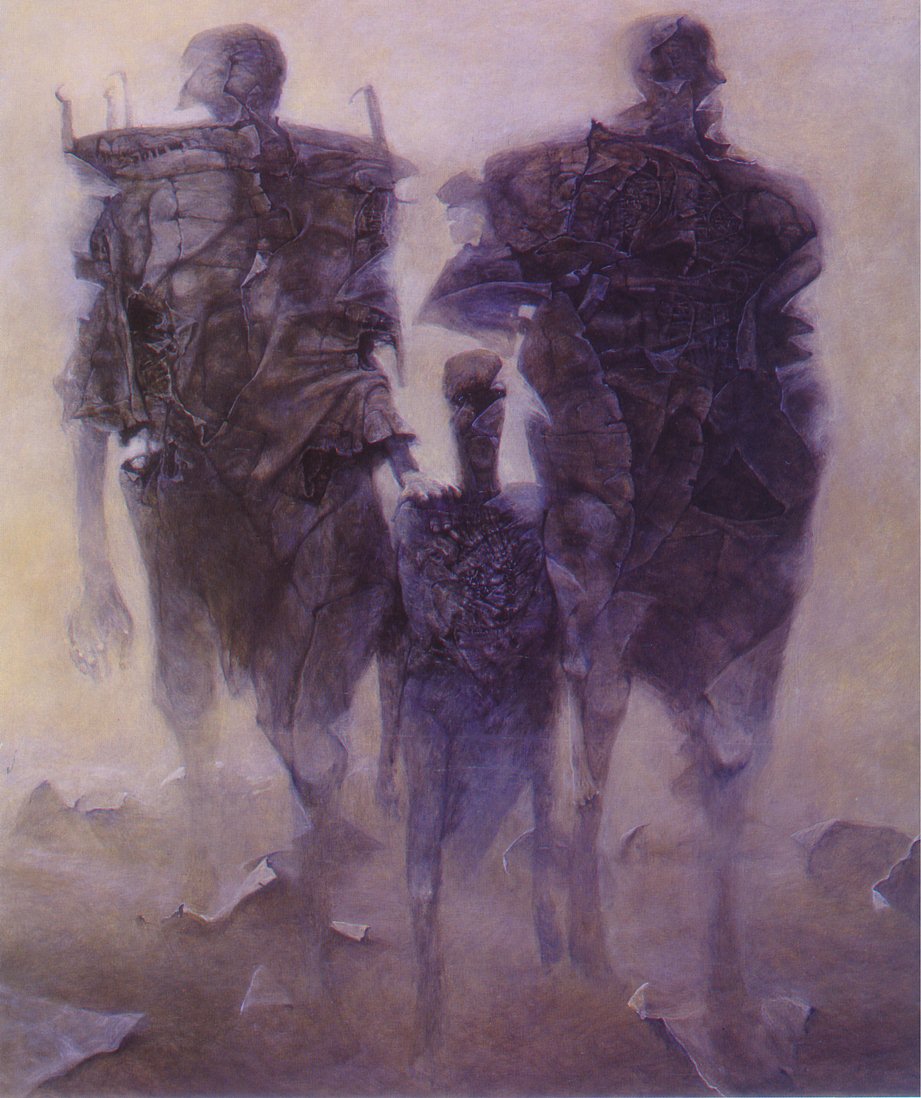 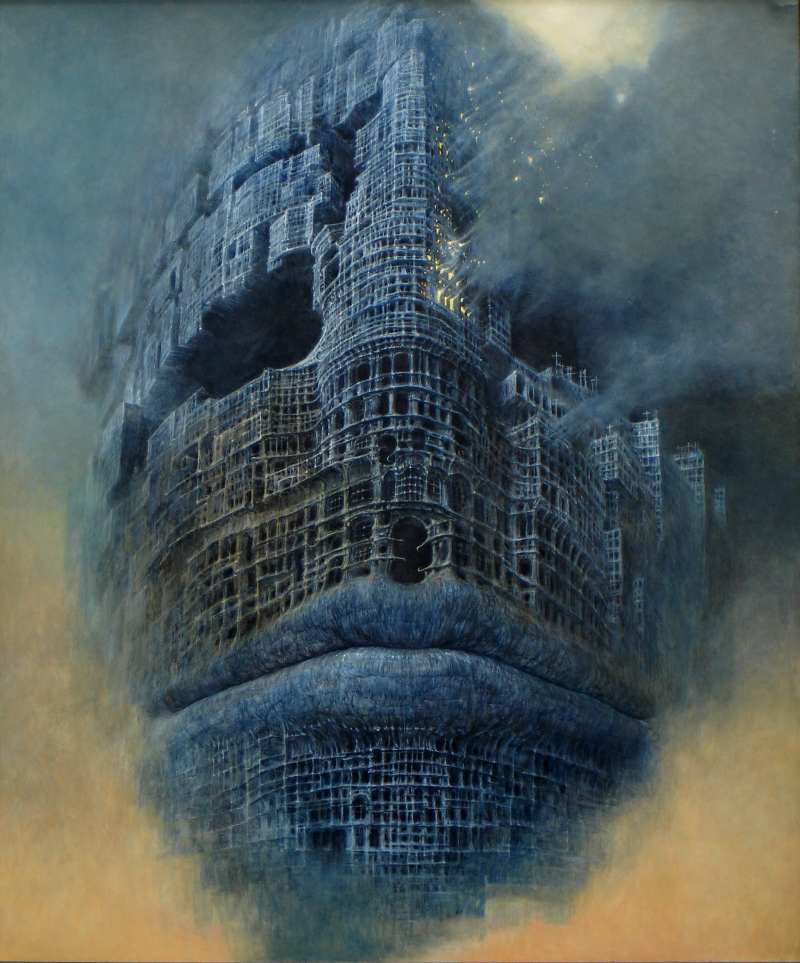 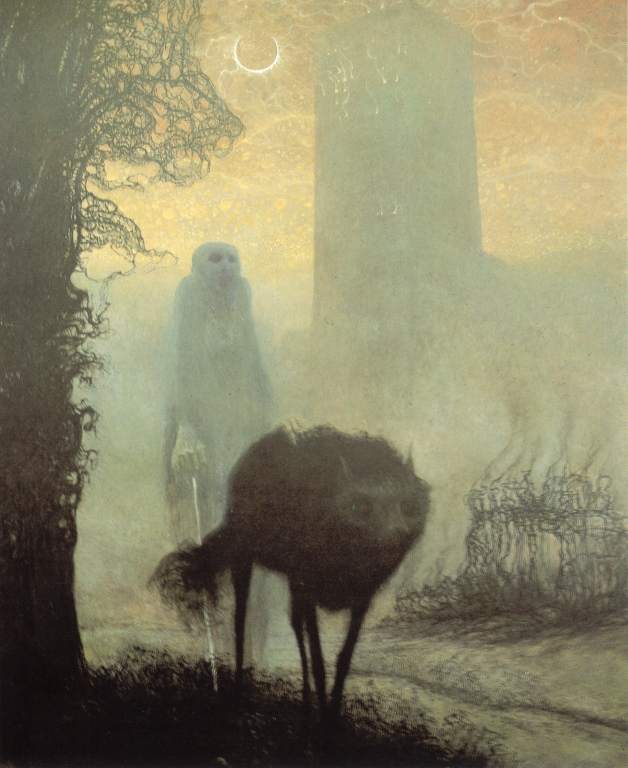 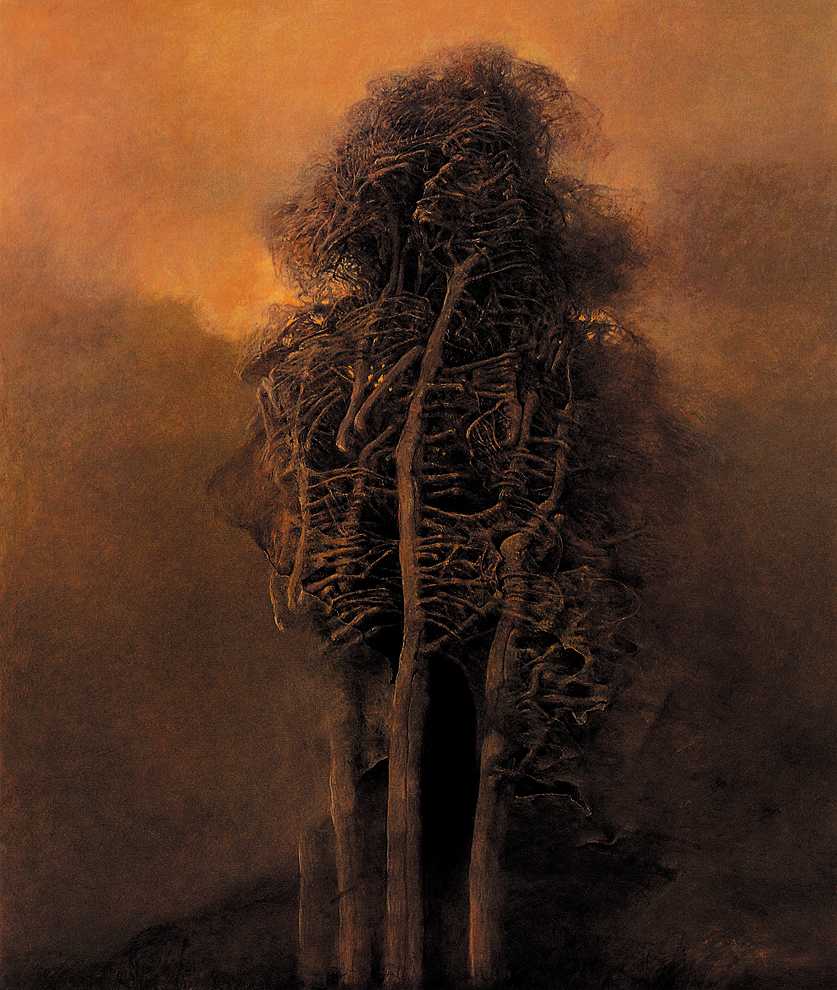